The night of the Academy Awards brought this post and tonight the TONY’S! 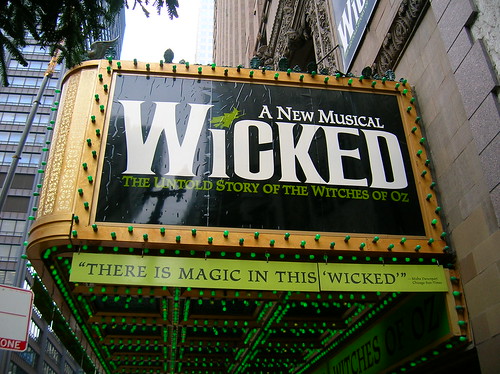 For me, one item on my Bucket List has been to see the Broadway Musical – Wicked. I’ve been a fan of the Wizard of Oz ever since I was a little child. Every year my family would gather around the television set, with a bowl of dad’s delicious popcorn, to be taken to the Land of Oz. During my last year of high school – prior to setting off to follow my dreams, I was able to be a part of the cast of the Wizard of Oz. (I also caught the “acting bug” at this time.) 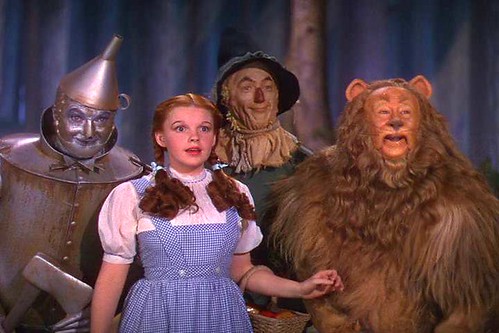 I took my fascination of the Land of Oz to my first teaching experience. Not only was I fulfilling my dreams, but I had the opportunity to help students follow theirs. Rainbows, a symbol of dreams come true, filled my classroom. Each year from September to December I would needlepoint a book marker for each student. Each book marker took me about an evening to complete. It was a simple pattern I created myself complete with their first initial and rainbow stripes. Many of the gifts or drawings I received from students were also that of rainbows.

One very special rainbow is still with me today. It was a gift from a former fourth grader who was diagnosed with leukemia when she was in 5th grade and passed away during her 6th grade year. I traveled the hour and a half to the hospital several times to spend time with her. She dreamed of being a teacher and created her classroom in the pediatrics ward. I would bring her bulletin board supplies to assist her efforts as she took the younger patients under her wing. Her father’s words, shared with me at her funeral, live on in me today. “She wanted to be a teacher just like you.” I remember telling him, “She already has fulfilled that dream.” – as tears streamed down both our faces.

Back to the Bucket List – Having caught the acting bug in my earlier days (even prior to high school) theatre has always been a special part of my life. I’ve spent time on stage at Lamb Productions as well as directing high school plays and musicals. I attend shows locally when I’m able and musical sound tracks fill my iPod making for great walking music. There are a few songs that will cause me to break out in a “time step” from time to time – you are now warned.

The musical Wicked: The Untold Story of the Witches of Oz is the bucket list item that was fulfilled this weekend. A very good friend and I saw the production in Omaha, NE. I had only heard how good it was, but was unfamiliar with the story line. I found several themes running throughout the show.

The songs of musicals stay with me. One of my favorites from Wicked is For Good. As I listened to the song during the show, thoughts turned to the many people who have come into my life – for a reason! These people come in the form of family, friends, teachers, students, authors, acquaintances, etc… both in person and virtually. Luckily, I had to opportunity to attend the musical with one of the people who have changed me FOR GOOD. As we left the theatre, I was able to share those thoughts with her!

Who has come into your life and changed you FOR GOOD?

Have you told them?

There is no better time than NOW!

“I’ve heard it said
That people come into our lives for a reason
Bringing something we must learn
And we are led
To those who help us most to grow
If we let them
And we help them in return
Well, I don’t know if I believe that’s true
But I know I’m who I am today
Because I knew you:

As I worked on this post today, I didn’t receive the best news. I took a fall on the path of my dreams. But, I will never stop believing in the “somewhere over the rainbow.” Too many people have changed me For Good and my dreams continues! They will be fulfilled.

Enter your email address below to receive updates from Kathy Perret